Sharing the Care Booklet: Equality Between Women and Men in the Bolsa Família Program

This booklet was written for the beneficiaries of the Bolsa Família Program, a conditional cash transfer program in Brazil. It addresses the relations between men and women, the division of housework and care work, inequalities, and violence.

“This isn’t the life for you”: Masculinities and Nonviolence in Rio de Janeiro, Brazil

Education and Sports for Equality: Activity Guide for the Practicing Sports, Winning in Life Project

This guide was developed from the “Practicing Sports, Winning in Life” project experience, conducted by Promundo in partnership with Child Hope and with funding from Comic Relief and Kindernothilfe. Its content reflects the objectives, the results, and the trajectory of the project that, between 2013 and 2015, offered several sports activities, communication campaigns, and educational workshops on gender, diversity and…continue reading

Practicing Sports, Winning in Life: Sharing Knowledge and Practices to Prevent Violence Against Children and Adolescents

This report presents an overview of the activities, challenges, and results of the impact assessment of the “Practicing Sports, Winning in Life” project. The project sought to prevent violence and discuss gender equality with children and adolescents through sports activities, educational workshops (with remedial classes and conversations on gender and rights), and community awareness campaigns.

Sharing the Ball: Education and Sports for Equality

Combining sports practices, remedial classes, and gender-awareness workshops, the project “Practicing Sports, Winning in Life” works to prevent violence against children and adolescents in the communities of Maré and Guararapes in Rio de Janeiro, Brazil.

This toolkit presents ideas for action to promote respect for diversity in companies. Created by a partnership of civil society organizations – Promundo and Grupo Conexão G – and companies within the the Eletrobras Group (an energy company in Brazil) – Cepel, Furnas, Eletrobras, and Eletronuclear – it aims to complement other actions taken to…continue reading

This story of change pulls out the main findings and recommendations from MenCare in Latin America: EMERGE Case Study, which highlights the MenCare campaign in Latin America and its work to promote positive fatherhood and men’s caregiving roles.

Central America and the Caribbean

This study details the implementation and impact of MenCare – a global fatherhood and caregiving campaign – in its engagement of men as involved, non-violent fathers for the advancement of gender equality in six Latin American countries – Brazil, Chile, Guatemala, Mexico, Nicaragua, and Uruguay. According to this study, fatherhood is a key entry point…continue reading

Central America and the Caribbean 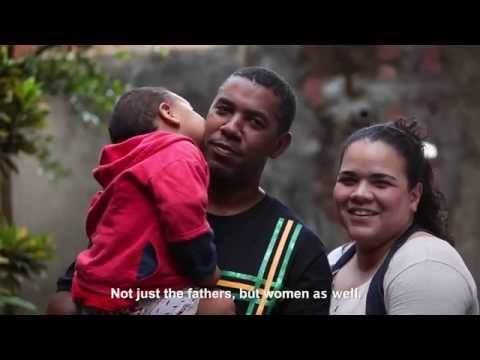 Marcio narrates the importance of men’s involvement in the lives of their children and families, even if it goes against traditional expectations, in this three-minute “MenCare Short.” Watch the full film here.

“She goes with me in my boat”: Child and Adolescent Marriage in Brazil

Brazil – like the rest of Latin America – has been absent from many global discussions and actions around child and adolescent marriage, which largely focus on hotspot areas such as those in Sub-Saharan Africa and South Asia. The available evidence within the Latin America and Caribbean (LAC) region, however, shows prevalence levels of child…continue reading